(Adapted from Psalm 43 by Yna Reyes)

Why so downcast, O my soul?
Why so disturbed within me?
Put your hope in God.

Hear me, O God,
and plead my cause against an ungodly nation;
rescue the rule of this land
from deceitful and wicked men and women.
You are God our stronghold.
Why must our people go about suffering,
oppressed by the injustices of a
corrupt political system?
Send forth your light and your truth,
let them guide us on May 9 election day;
let them bring this nation to your righteous reign,
to the center of your perfect will.
Then we, your children, will go to the altar of God,
To God, our joy and our delight.
We will praise you with joyful singing,
O God, our God.

Why are you downcast, O my soul?
Why so disturbed within me?
Put your hope in God,
for I will yet praise Him,
my Savior and my God. 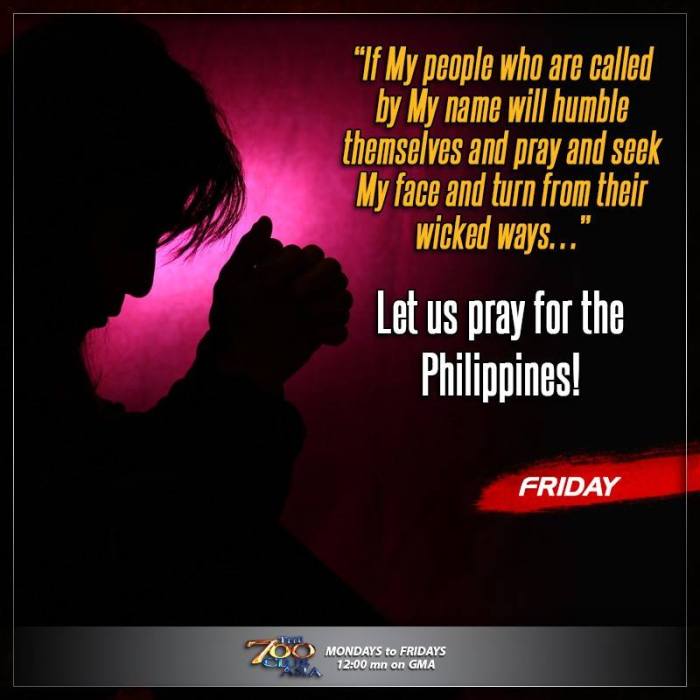 “If My people who are called by My name

This is the CALL to pray for the Philippines!

What are the ingredients for a good leader? What are the qualities we should look for when choosing the candidates we’re voting for?

In case you’re still processing all the issues that come with the upcoming election, we have a free ebook for you called What About Philippine Politics?

What About Philippine Politics?

The church’s track record as it relates to the state has not been without blemish or lapses. Throughout the centuries, the church in its relationship with the world has swung from domination to capitulation, from separation to solidarity.

Domination was characteristic of periods when the church was in a majority situation, as in the time of Constantine up to the close of the Middle Ages, when the gilded throne of the papacy ruled with both the cross and the sword. Capitulation characterized periods when the church was weak and in a minority situation, with survival as its main agenda. Separation has been resorted to in times of internal rot and corruption, as with the monastic movement which saw isolation as a form of purification. Solidarity occupied the church in periods when repression caused it to be a voice to the voiceless, as with recent experiences in authoritarian and totalitarian regimes.

Churches in the Philippines exhibit these tendencies in varying degrees and permutations. The Roman Catholic Church, being in the majority, wields much influence in affairs of the state, while Protestant churches, as a minority, display more insular tendencies. Charismatic churches emphasize inwardness and the use of spectacular spiritual gifts that have yet to result in the practical out-working of justice on a national scale. The Iglesia Ni Cristo, on the other hand, directly uses worldly power to advance its own ends and pet political causes.

What do we make of these various church responses to the problem of political power? First, God’s Word has social dimensions that cannot be ignored. Social justice is a general concern of the church. The poor and the weak, as the newly-installed Pope Francis I reminded us, ought to be at the center of the church’s mission.

But secondly, the way to go about this is not to turn the church as an institution into a political power or a social welfare agency. The local church — or what Sir John Stott calls the ‘church gathered’ — cannot major in making political pronouncements, or even in economic development, for its primary calling is evangelism and discipleship. It is the ‘church scattered’ — that is, the people of God spread across social structures like business, media or government — who have the responsibility to see to it that the institutions in which its members serve are consistent with God’s purposes for society. Current corporate action by Christians seeking to impact governance and the theory and practice of their professions is an example of the visibility of the church expressing itself in secular structures.

The Word of God certainly has something to say to errant powers. But there is a difference between being prophetic and mere politicking. The pulpit cannot be turned into a platform for passing judgment on sociopolitical issues. A church turned lobbyist is, in a sense, no more than just another vested interest, to be fought and resisted in much the same way that other vested interests need to be resisted when they begin to skew and subvert democratic processes.

The church has no need to play politics in order to wield influence. Simply by being itself, by being true to the power of its divine mandates and the purity of its purpose, it has power. It need not descend to the level of a power bloc by the acquisition of political clout.

A writer and a social anthropologist, Melba P. Maggay, PhD, is a sought-after international speaker and consultant on culture and social development issues, particularly at the interface of religion, culture, and development. A specialist in intercultural communication, she was a research fellow on the subject at the University of Cambridge in the UK under the auspices of Tyndale House, applying it to the question of culture and theology. She has lectured on this and other cross-cultural issues worldwide, including a stint as Northrup Visiting Professor at Hope College, Michigan and as Visiting Lecturer at All Nations Christian College in England. As a development specialist and practitioner, she has initiated Church as Power Broker 63 by Melba P. Maggay, PhD and supervised fresh research projects and groundbreaking grassroots work as President of the Institute for Studies in Asian Church and Culture, a research and training organization engaged in development, missiology and cross cultural studies aimed at social transformation.

What About Philippine Politics?

What kind of Philippines do I long to see?

A land that is PEACEFUL. Where Muslims and Christians and animists and those with no religion at all can live together as friendly rivals but not as enemies. Where disputes are resolved by discussion and debate and not with the barrel of the gun. Where one may walk the streets a night unarmed and remain unharmed.

A people who are FREE. Free to think even the unthinkable, free to worship God according to one’s best light, free to elect rulers and to replace them, free to argue one’s case in the media, free to travel wherever one pleases, free to live and work anywhere in the islands.

A territory that is SOVEREIGN. Friendly with all her neighbors, and working in solidarity with them in promoting regional interests. Cordial with all nations in the East and the West, the North and the South, but sovereign in her foreign policy. Free to chart her own destiny for Filipinos have the special duty to promote the welfare of their nation.

A nation that is JUST. Every man and woman and child receives his/her due. The poor are not discriminated against because of ignorance or lack of access to legal services. Judges and justices cannot be bought but dispense and apply the law with impartiality. Equal pay is given for equal work. Everyone has equal opportunity for education, housing, employment, medical care, and other social services.

A community that is PARTICIPATORY. People taking responsibility for their lives, and increasingly empowered
to do so. Making decisions that affect their families and neighborhoods, their towns and cities, and the entire country. Being responsible for one another for “each man is his brother’s keeper.” Political in the broadest and best sense. Our stewardship includes the care of planet Earth, God’s appointed habitat for mankind.

A country that is PROSPEROUS. Not prosperity at the expense of freedom, but a progressive economy that grows from wise policies, efficient government, and honest business practices. Prosperity that does not merely make
the rich even richer, but one that benefits all the people, reaching to all parts of the countryside, finally breaking the
back of centuries of feudalism.

A society that is RIGHTEOUS. Only through the Christian gospel are people “put right with God,” so we evangelize as vigorously as we can. However, there is a public righteousness that Christians can promote as salt of the earth and light of the world. As an “overwhelming minority,” we can influence the rest of society to minimize graft, tax evasion, violence, prostitution, and other expressions of a corrupt society.

“Righteousness exalts a nation, but sin is a disgrace to any people”

TODAY, God enabling me, I commit myself to making this dream become reality. First published in PATMOS, magazine of the Institute for Studies in Asian Church and Culture, May 1992, Vol. 8.

* First published in PATMOS, magazine of the Institute for Studies in Asian Church and Culture, May 1992, Vol. 8.

Dr. Isabelo F. Magalit is the senior pastor of a local church affiliated to the Philippine Council of Evangelical Churches (PCEC). He was the president of Asian Theological Seminary for 16 years — from 1989 to 2005. During the EDSA Revolution of 1986, he led his church, the Diliman Bible Church, in manning the barricade in front of Gate 2 of Camp Aguinaldo. He has written a dozen books and booklets, including Who is a Real Christian?; Who is Jesus According to the New Testament? and Can a Christian Be a Nationalist? published by OMF Literature, Inc.