From the CBN Asia Family of Ministries to yours, have a joyful Christmas and a blessed new year! 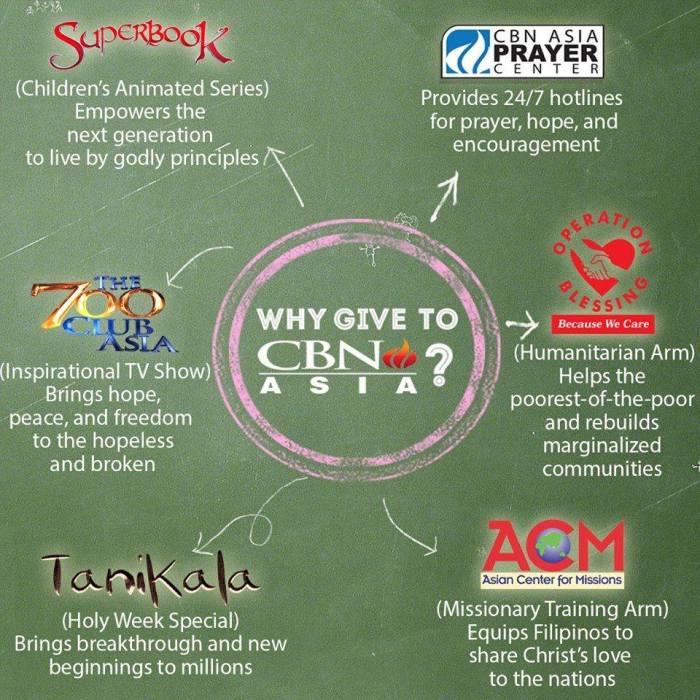 Ever wondered where your donations to CBN Asia go?

It goes to the production of The 700 Club Asia, Superbook, and Tanikala and the work of the CBN Asia Prayer Center, Operation Blessing Foundation Philippines, and the Asian Center for Missions.

The 700 Club Asia – Inspirational TV Show that brings hope, peace, and freedom to the hopeless and broken.

Superbook – Children’s Animated Series that empowers the next generation to live by godly principles.

“Let the children come to Me, and do not forbid them; for of such is the kingdom of heaven.”

LITTLE ROCK, Ark. — “God’s Not Dead” surprised Hollywood with a box office take of more than $60 million. It also sparked a social media movement with a modest $2 million movie-making budget.

That success opened the door for a sequel, which opens in theaters April 1, 2016. CBN News was the only television news crew invited to the set for the filming of God’s Not Dead II.

Screen writing partners Cary Solomon and Chuck Konzelman wrote the story for the first installment of the film, that pitted a student against his professor in in a passionate debate about God’s very existence. Solomon and Konzelman have also written Gods Not Dead II.

Discussing their creative writing process, Solomon told CBN News, “We pray on everything that we do. And the Lord inspires. He comes forward. And that is really the creative process.”

Konzelman added, “The first movie I think brought people to the point where they thought someone should do something. I think the second movie points more to, ‘I need to do something in my own life.'”

“God’s Not Dead” was filmed on the campus of Louisiana State University in Baton Rouge. Much of the production for “God’s Not Dead II” unfolds in Little Rock, Arkansas, inside the state Supreme Court.

The fictional script often feels like a page ripped from real-life headlines. A public school teacher finds herself on trial for answering a student’s question about Jesus Christ.

Not Just Another Role

“This was a calling for me to do this. I felt like this was a mission for me to go on and stand up for my beliefs and be a little bit louder about my faith,” Hart told CBN News.

“I was raised a Catholic girl and married a Baptist, so I became a Presbyterian, but all the while searching,” Hart continued.

“In the last few years, I have found a beautiful Bible study, where I have felt a lot of fellowship with the women and felt very loved and nurtured there and it has really helped my walk,” she said.

Describing the Endler character, Metcalfe said, “He is not a religious man. He is not a Christian. But he comes to respect Grace’s religious integrity.”

From Alcoholic to Christian Actor

Metcalfe recently talked about his personal faith and admitted he began a personal relationship with God five years ago when he became sober through Alcoholics Anonymous.

“I feel that that really helped me overcome a difficult time in my life and since then has really deepened and enriched my life in a lot of ways,” he said.

‘A Spark in the Dark’

The band’s lead singer Michael Tait described the film franchise to CBN News saying, “It’s just a little spark in the dark can light up the whole scene. And ‘God’s Not Dead’ was that little train that could.”

The storylines in both films are personal to the members of the popular Christian rock band.

Singer and keyboardist Jeff Frankenstein told CBN News, “Some people will look at that and say … ‘you are being too sensitive about what you believe,’ but it really does exist.”

“There are millions and millions of people that resonate that, that go through that every day,” he continued. “And I think we have gone through to a certain extent, even being in Christian music.”

“There are places that won’t invite us to play on their late night TV shows. ‘We can have a Top 4 record on Billboard. But if you are talking about that Jesus person, we might not want you to come visit us,'” he said.

Drummer Duncan Phillips added, “I got little kids and I fight for those moments where we can enjoy time together and I think what the movie did was give families that moment.”

More Than a Film

“God’s Not Dead” is no longer just a film. It’s a Pure Flix franchise.

“‘God’s Not Dead’ dealt with the existence of God. Is God real? Is He not? ‘God’s Not Dead II’ deals with who was He? And if He was Jesus, was He man, myth or Messiah?” Pure Flix producer Michael Scott told CBN News.

“Ultimately, my hope is to develop an army of people that can talk about their faith intelligently and really take that to the world,” he said.